My best Dairy Free foods in Krakow and Zakopane

Over Christmas and New Year I was on a holiday in Poland in Krakow and Zakopane. I am now blogging to tell you about my favourite foods in Krakow and the Big Z. There are a lot of words in this one so I have told my Mum what to type. The foods I am recommending are Dairy Free because I am a DF cool kid. (I am 8 now and I have not done a blog post in a while because I have just published a cook book called ‘Things on Sticks’ - you can buy it here: https://martha.ellis.scot/things-on-sticks-cookbook/). 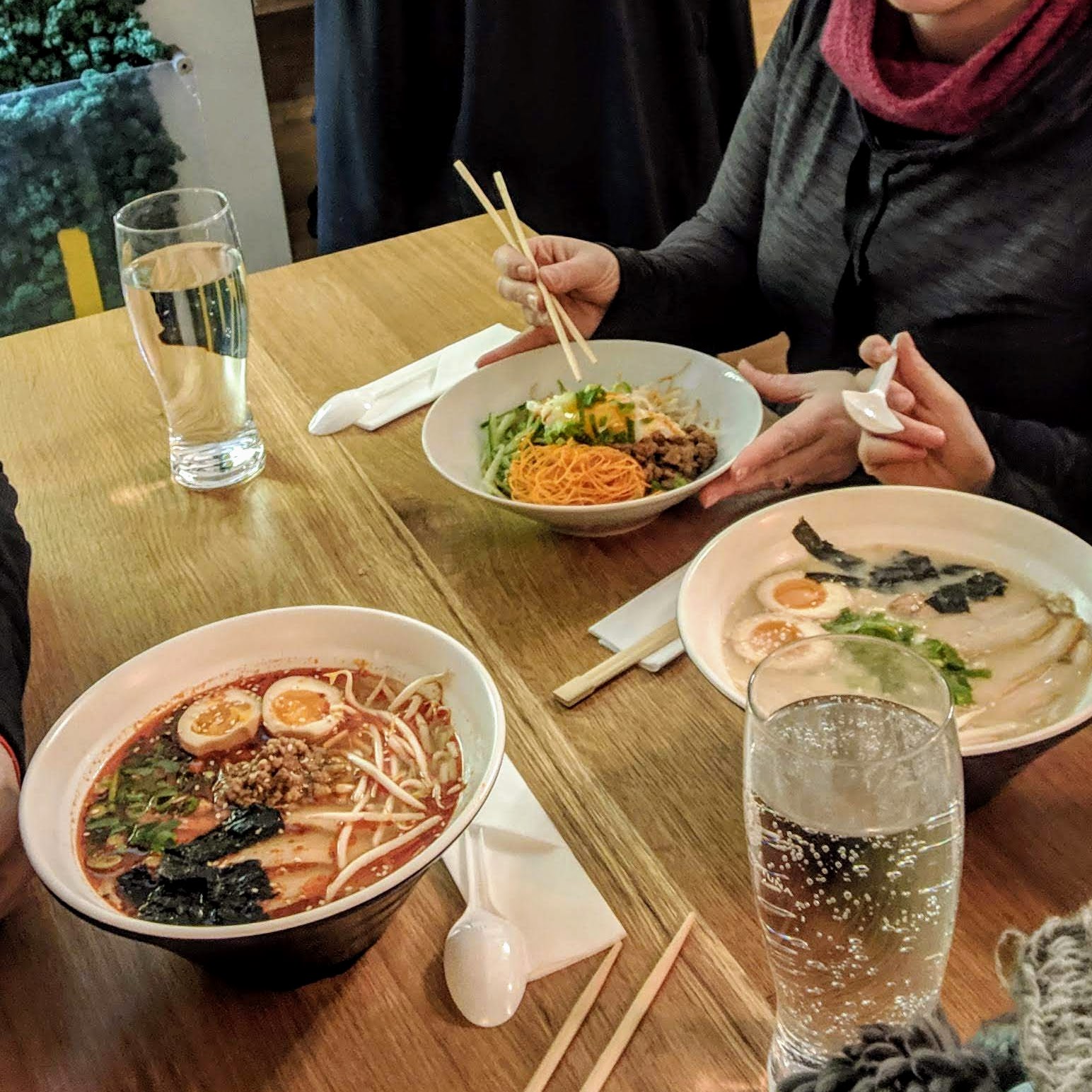 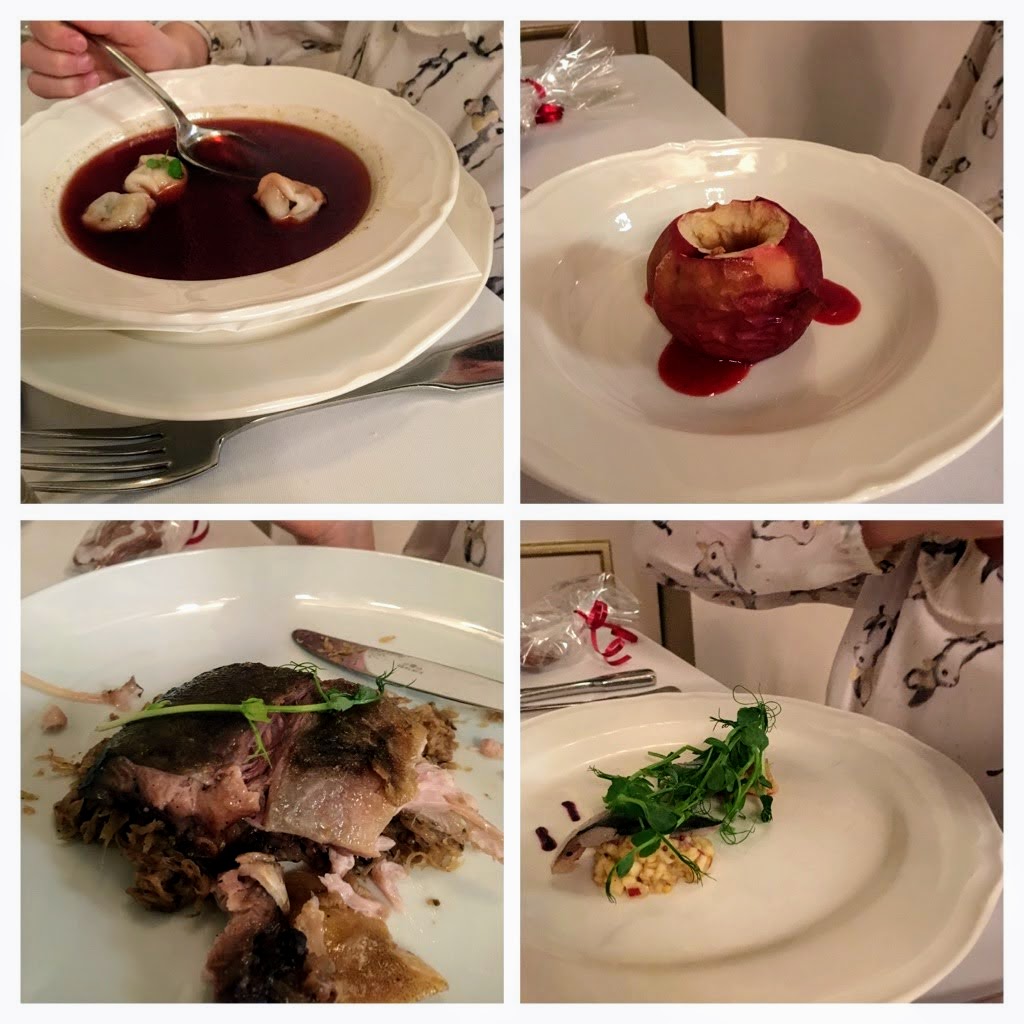 We had Christmas Eve dinner in a very fancy hotel dining room. There was a big chandelier. It felt posh. There were lots of Christmas decorations and we needed to look smart. I wore a fancy bunny blouse with corrugated trousers. I ate Beetroot soup with dumpling, Pickled herring, Baked carp, Roasted apple. They made mine without dairy so I didn’t get ice cream with the apple but I got an extra big big portion of strawberry sauce on it. The best thing of all of the courses was the apple one, followed by the soup with dumplings, then the pickled herring and last the carp. But I felt glad I had tried it. 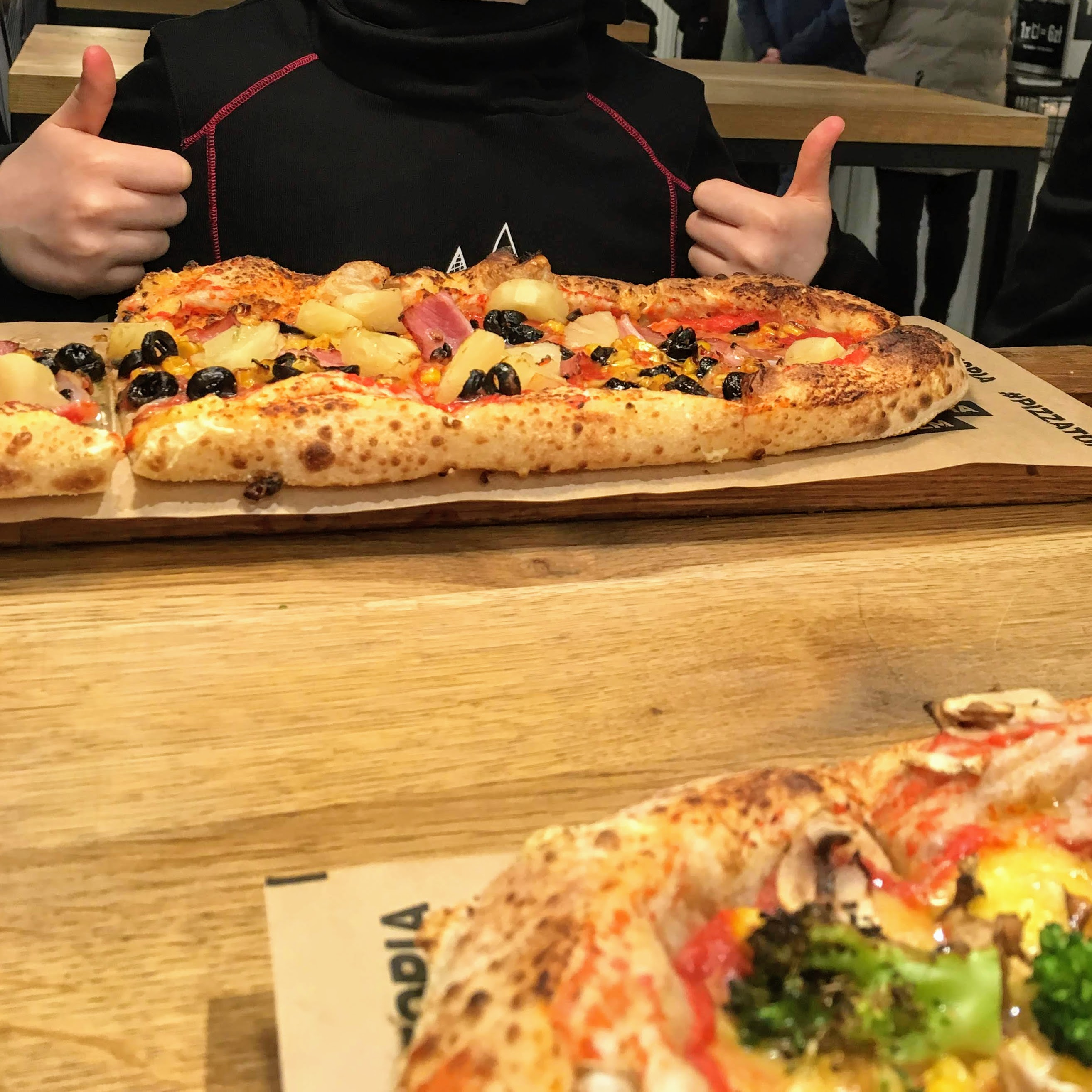 I had a pizza with pineapple, vegan cheese, black olives and bacon. There was a conveyor belt where you chose your base first, then sauce, then toppings, then cheese. It felt like a bar because they had high up table seats. It was very delicious. 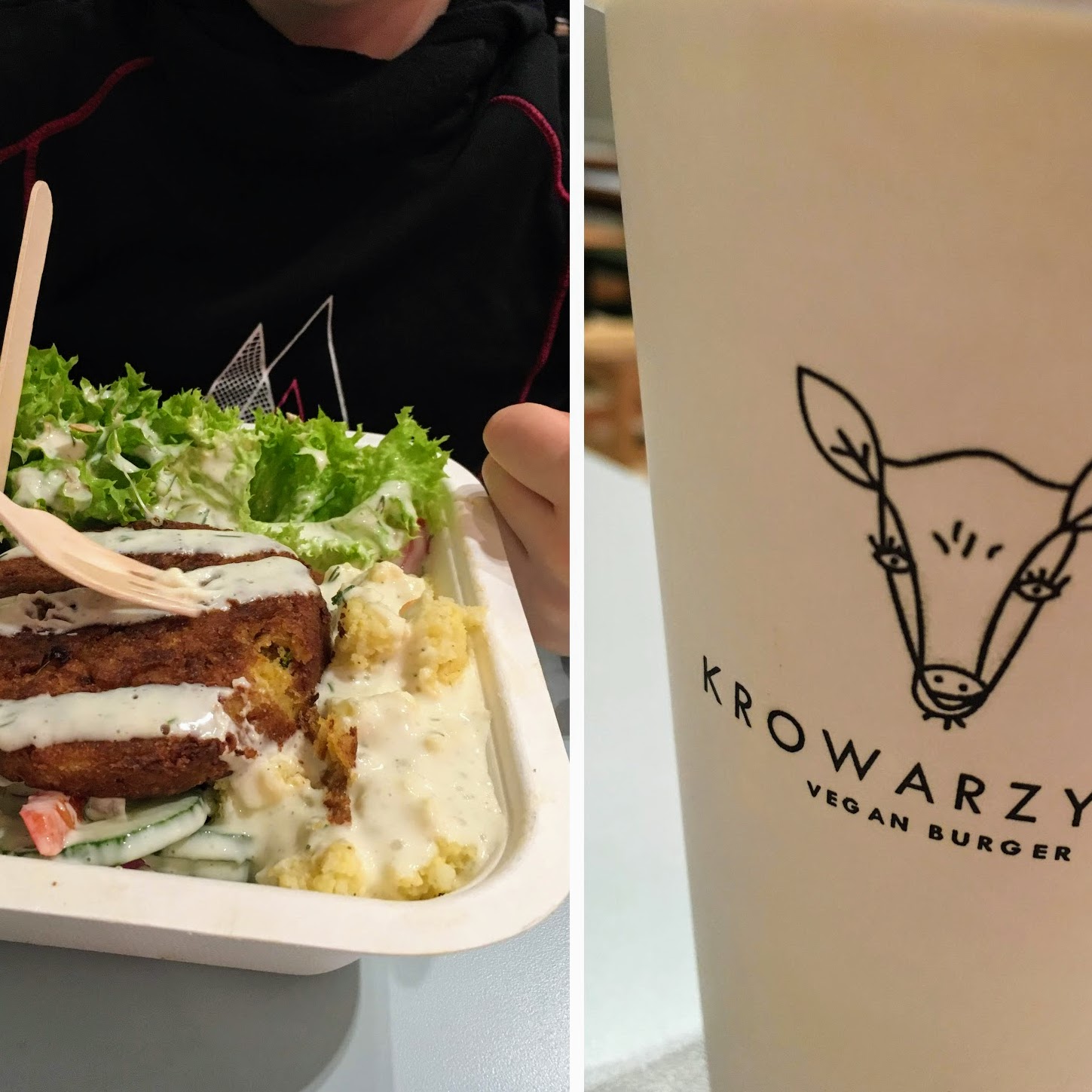 Me and my Mum went there while my Dad was exploring another part of the city. There was a really really cool geometric cow logo and they had buzzers to tell you when your food was ready, and they had a very bendy coat rack and a really cool name because in Polish it is ‘vegetable cow’. I had falafel, salad and very zingy lemonade. We sent pictures to my Dad and he said it looked tasty. 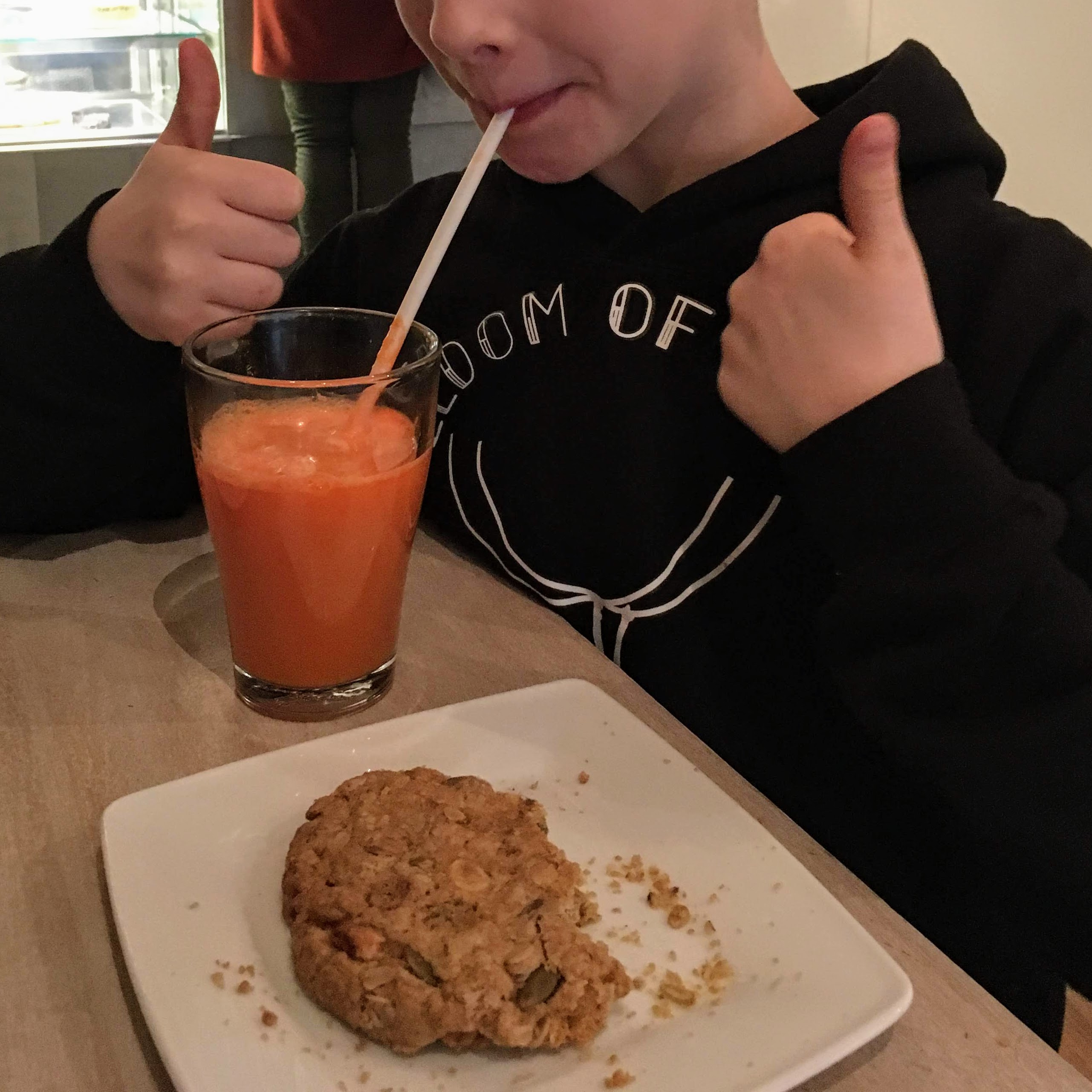 I went there at breakfast time but I had already had my breakfast quite a lot before so I had a snack. I had a Smoothie and a vegan biscuit. The smoothie had mango and orange and ginger and was full of health and yum. It was nice to be able to have a biscuit as there are often none that I can eat. Inside the cafe they had wood on the walls and it was very textured and rustic but also quite shiny and new. 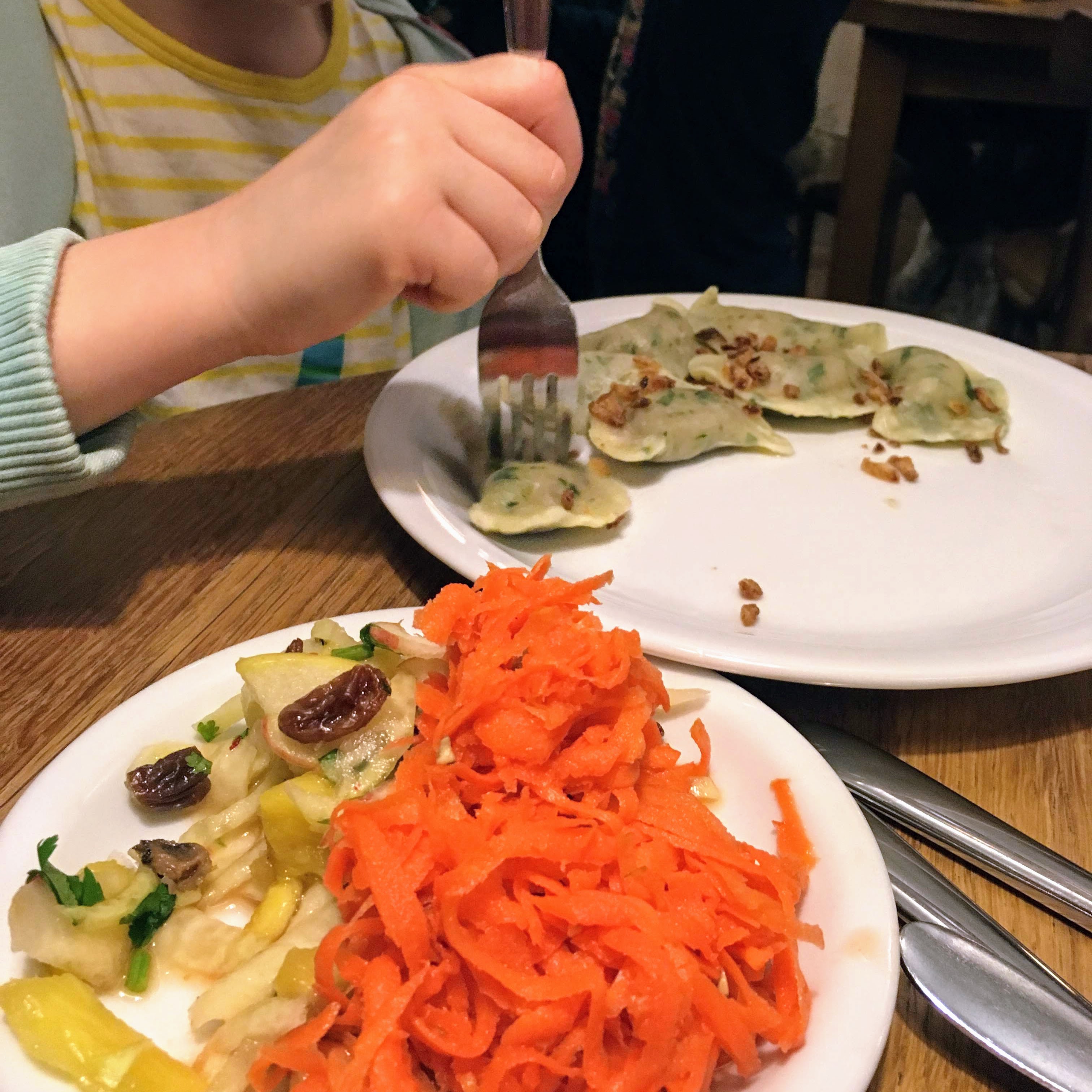 We could see this cafe from the window of our apartment. It was really good. We had to queue to get food for 15 minutes but it was worth waiting. I had Pierogi filled with lentils and carrot and pineapple salad. The dumpling skin was chewy but just the right thickness and the inside was lovely and savoury. The salad was aromatically spicy and pineapply. There was a picture of a cool fish on the logo and it had the letters of my Dad’s name in it which was funny. 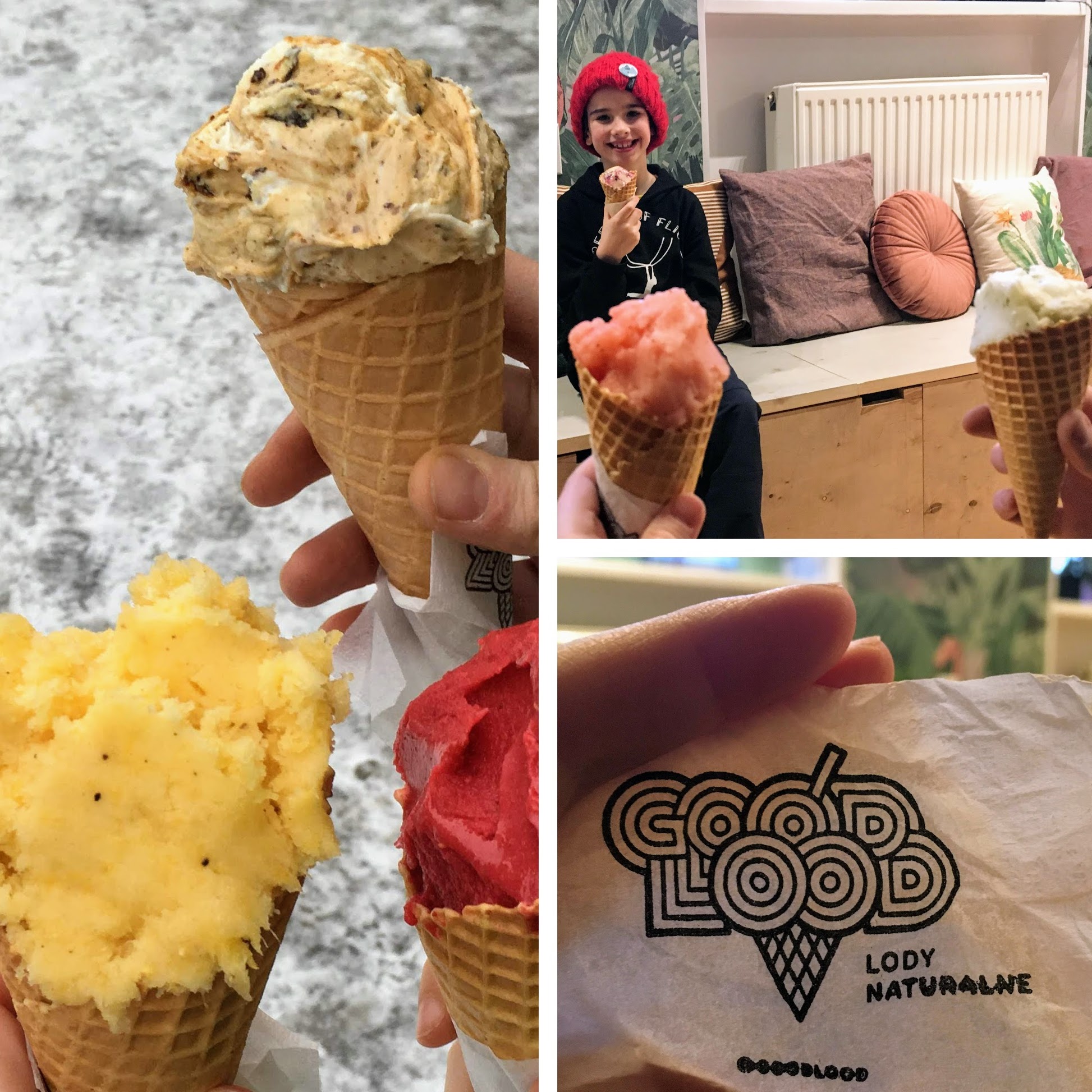 It was freezing and minus six and but it was very exciting to find DF icecream so we bought some two times. The flavours changed every day. Round 1: Peanut butter and jam, lemon and parsley, strawberry and prosecco. Round 2: Skittles, Orange and clove, something else not DF for my Dad. They had more DF choices than most ice cream shops in Edinburgh. If I worked there I would make a tropical fruit and tangy lime flavour. If I lived there I would eat it at least once a week. They are all over Krakow and you should look out for them. 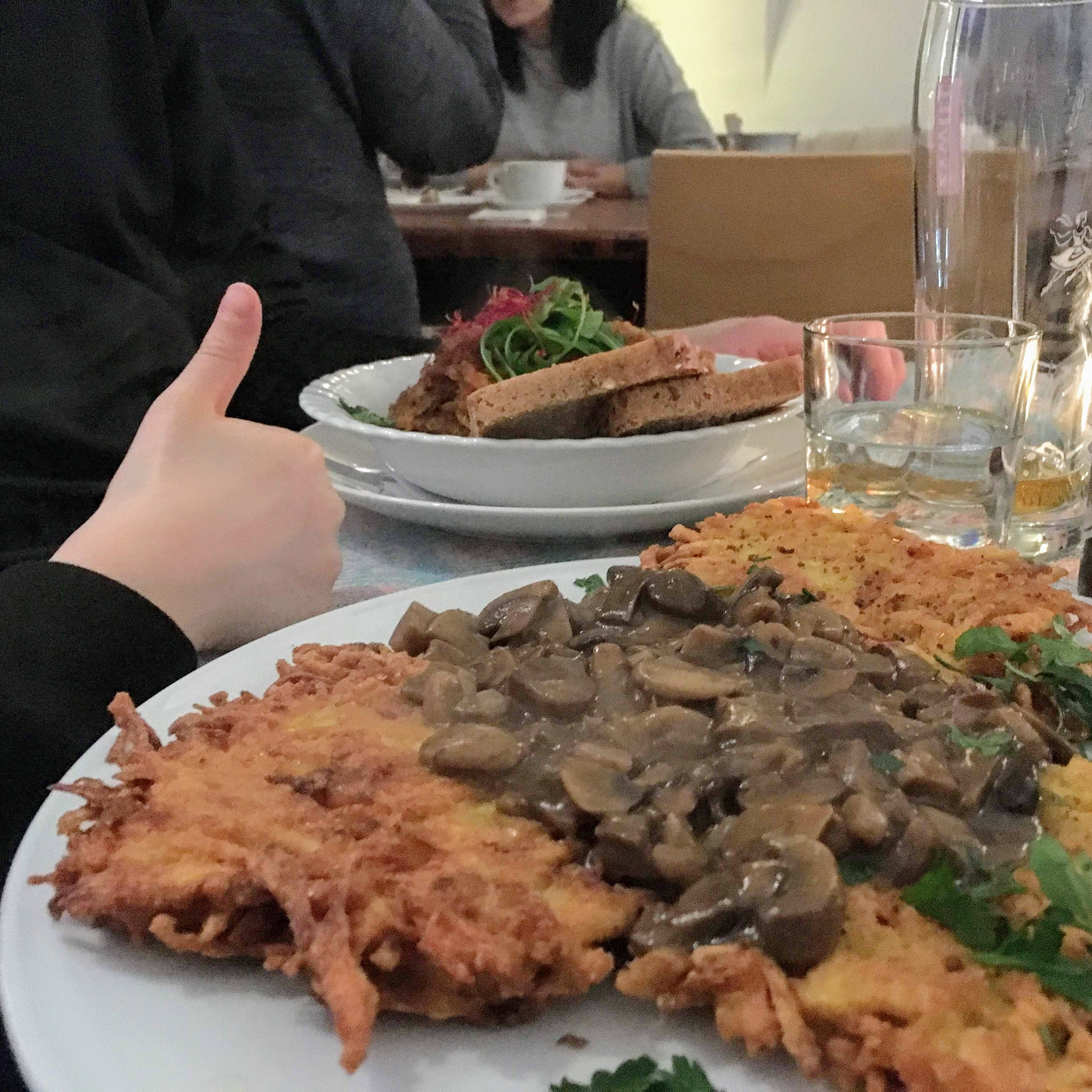 In the restaurant there was lots of nooks and crannies. They served us delicious pancakes made of potato with mushroom stew and Vegetarian bigos. The plate of pancakes was massive. They were crispy and yummy. I felt like I was a big big person because we went there at night. 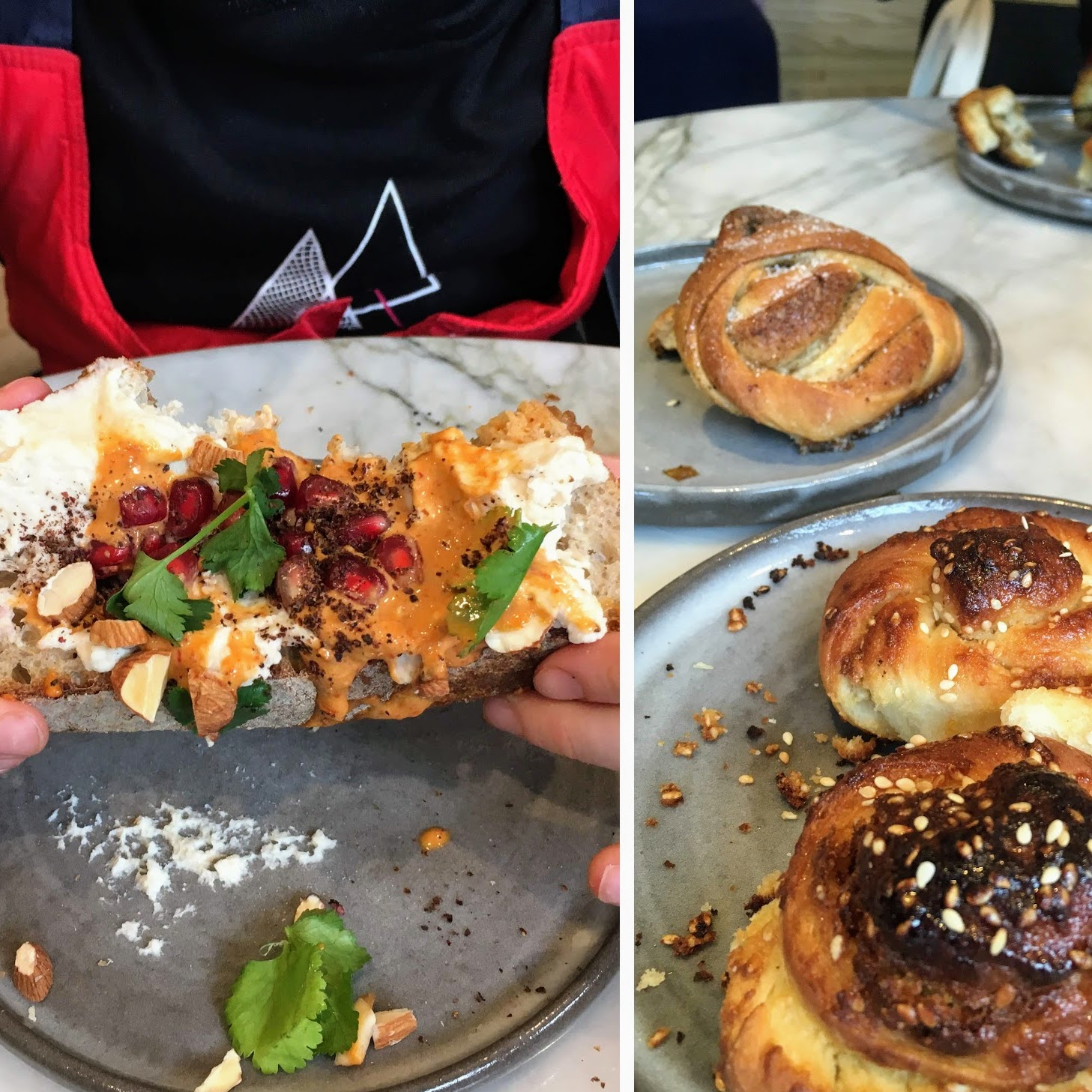 The evil person called Mummy made me walk for miles to get there. I still feel tired after that and it was 3 months ago. When we got there it was really nice. We shared a Caramel & tahini bun, orange and cinnamon bun, a Cardamon bun. We drank fancy tea. I was still hungry because I had walked sooooo far that I had Sourdough with cashew cream cheese, hot tomato and pepper sauce, almonds, herbs, pomegranate. And we bought a big loaf of chocolate bread cake to take away. We had it for breakfast before we had to go home. 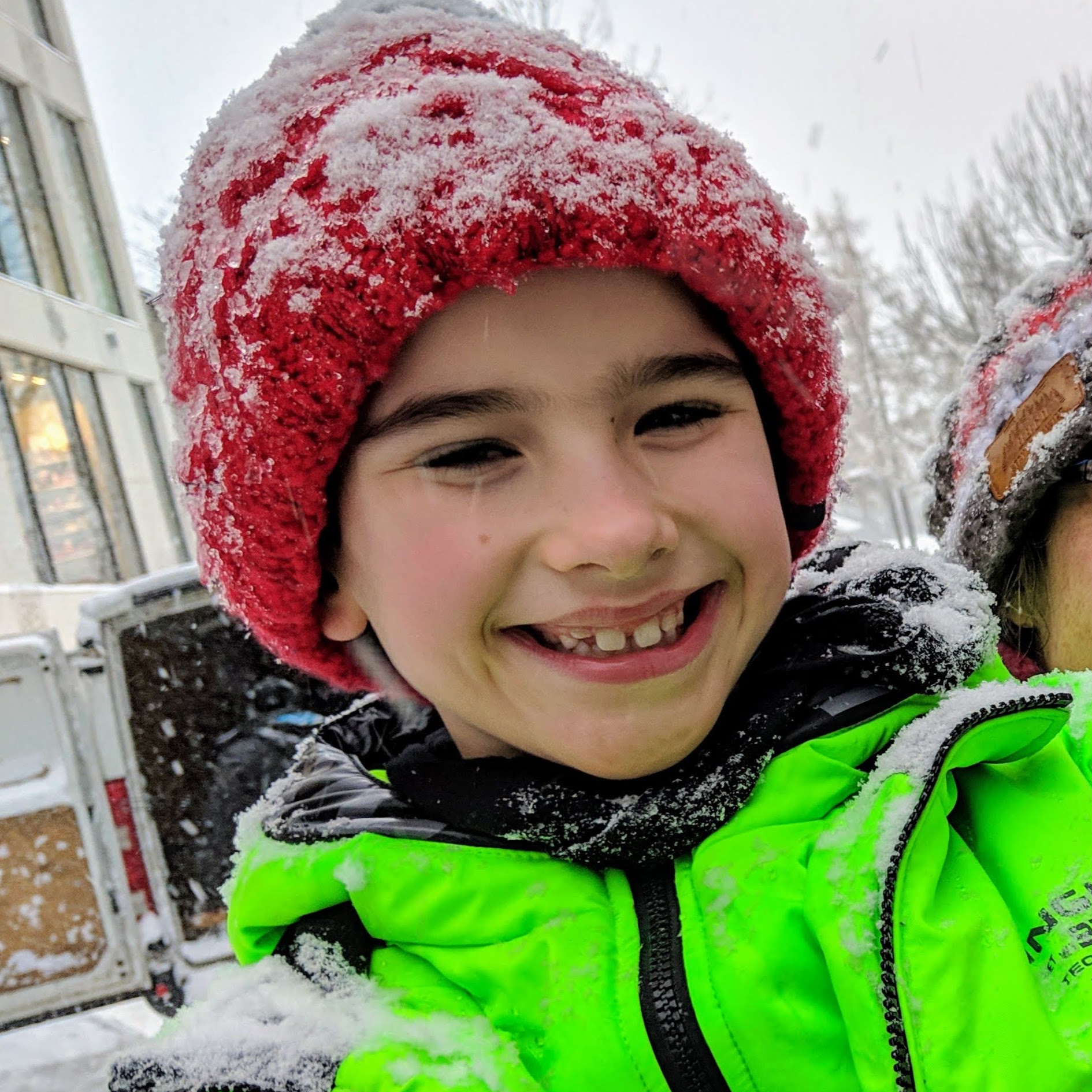